What the papers say – the BMW i3

What the papers say – the BMW i3 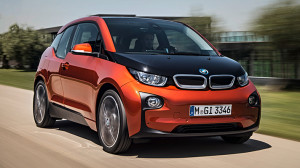 BMW have billed the BMW i3 as “the car of tomorrow”. Designed for city driving, could it be the car for fleet drivers doing mostly city driving? The i3 has been inspiring articles from both car and tech sites,  and we’ve pulled a few of these together.

No opinion from The Telegraph in their video and article re the BMW i3, however the comment section has a lot of people discussing their opinions on electric cars and this one in particular. (Disclaimer – at the time of writing all conversations in the comments section were civil!) It seems that there is still a long way to go in convincing drivers on the benefits of electric cars.

t3, the gadget website, also talks about the app that allows the driver to control certain functions of the car.

“Outside of the car there’s the new BMW i Remote iPhone and Android app which, when connected to the car will let you check battery levels and change the climate control to allow defrosting before you leave the house.

It’ll also come with a navigation option letting you send destinations to the car before you’ve even got in, the i3 will then in turn send alerts to the app if, say, the wiper fluid level is low.”

With drivers embracing apps that make their lives easier, do you think that this is a good selling point?

“The first decision customers will need to make is whether to go for the pure electric model or the range extender. The former uses a 168bhp motor with 250Nm of torque to go from 0-62mph in 7.2 seconds – the same time as a BMW 120d M Sport. Top speed is 93mph and an 80-100-mile range is promised from a single charge.”

Auto Express also look into the decision whether to lease the vehicle or buy.

“The chance to own a new carbon fibre BMW i3 for just £369 a month sounds a very tempting proposition, but over three years does this leasing packing really make more financial sense than buying the i3 outright?”

Top Gear have driven the BMW i3. Given their past well-documented relationships with electric vehicles, what do Top Gear think?

“At first sampling then, this is a compelling electric car. It’s not the first on the market, but BMW has put some original thinking into almost every part of its design and engineering. It drives sweetly, is distinctively designed, and has the reassuring range-extender option if you are anxious about running flat.”

Business Car Manager talk about the i3 for business

“HMRC has confirmed to Business Car Manager that you should claim the same 45p per mile rate for electric cars such as the BMW i3. Which could make the BMW i3 extremely cost-effective for directors and sole traders who decide to take this route.”

So, what do you think? Does the BMW i3 have a place in current business fleets or is there still work to be done?

Stories behind the cars - does every car have a story?

Driver fatigue - how do you ensure your company drivers are safe?