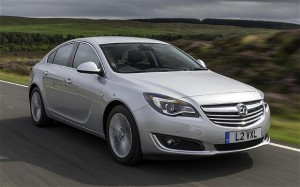 The revised version of the Vauxhall Insignia was shown at the Frankfurt Motor Show, and the reviewers have driven it already. What do they think, and will it continue to be a favourite for business car drivers and fleet managers?

Ralph Morton at Business Car Manager has a thorough review with all the facts and figures that a fleet manager will need to know. He concludes,

“From under £50 a month in company car tax, you will be driving a spacious, good looking and well specified large company car for your business miles.

You could of course choose a 2.0 Golf GTD (smaller, and costlier on tax); or a BMW 1 Series (same issues as the Golf). But you won’t get the big car low tax experience of the new Vauxhall Insignia.

Downsizing? Who mentioned that to the Vauxhall engineers? With the new Vauxhall Insignia you really don’t have to. “

Autotrader tested two of the Vauxhall Insignia’s new engines. It felt that the steering was a weak point, and was disappointed with the notchy gear changes.

“Nevertheless, despite these reservations, all these changes combine to make the Inisgnia a more attractive car than ever before. It lacks the space and quality of a Volkswagen Passat and the exciting drive of a Ford Mondeo. But, if you choose your next car on a spreadsheet rather than how it drives down the High Street, the numbers could make a compelling case in its favour.”

Andrew English of The Telegraph talked about the Vauxhall Insignia’s reputation in fleets,

“The problem is that however well the Insignia drives, rides and sells, people still see it as a prestige-free repmobile.

In the UK, where at least 80 per cent of the 167,000 Insignias sold since 2009 have gone to business customers, Vauxhall doesn’t do itself any favours by allowing sub-10-grand new cars on the forecourt.

It’s Britain’s fleet market which distorts and corrupts values. Even BMW, which sells more of its 3-series models than Vauxhall sells Insignias, is not immune to discounting. As Stuart Harris, Vauxhall marketing expert, says: “the premium makers have now got a taste for volume, but sometimes that’s a bitter taste.””

He gives the Vauxhall Insignia 4 stars out of 5 and concludes,

“So, good just got better. The Insignia is still a great car and it seems a pity we all spend our money on other German cars – with flashier badges – since they’re not necessarily better.”

Surprise surprise, Top Gear gets in a few digs at Vauxhall and company cars.

“So far you’ve given me a new set of headlights and a couple of new screens inside. There must be something else.

Yes. A staggering 80 per cent of all Vauxhall Insignias are sold for business customers – Vaux’ doesn’t hide this fact, actually recognising the Costa Coffee-glugging motorway sluggers are the key to the car’s sales success. And thus, there have been a few suspension changes to make it more comfortable for this kind of person.”

“This kind of person”

“Should I buy one?

Depends if you eat your breakfast at a motorway service station or in the comfort of your front room. No, all joking aside, this new Insignia is a very polished product with flashes of premium aspirations. The drive is good, if not the class best – it’s the familiar story of the Mondeo being slightly better – but it’s around £1500 cheaper across the range than before. Worth a look.”

When it comes to managing cars in your fleet will you add the Vauxhall Insignia? What do you think of the changes that have been made?

The best car adverts over the years - Honda "Cog"

The best car adverts over the years - Audi "Evolution/Revolution"

In General, Uncategorised on 30th September 2013

Do your company car drivers chose speed over safety?