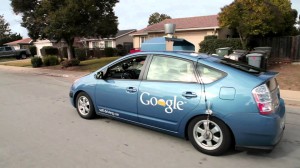 At the end of every motor show there is one story that is the news of the show. This year’s Detroit Motor Show has been notable for all the tales of self-driving cars (or autonomous cars).  These stories caught our eye, and what it could mean for fleets and fleet management.

“Toyota has revealed what they’re calling the Advanced Safety Research Vehicle; an autonomous car equipped with sensors and automated control systems which can observe, process and respond to the vehicle’s surroundings.

Technology, including; GPS, stereo cameras, radar and Light Detection and Ranging (LIDAR) laser tracking will, hopefully in the future lead to a ‘fully autonomous car’- however Toyota was keen to stress that their vision isn’t necessarily to release a car that can drive itself; instead they “envision technologies that enhance the skills of the drive, believing a more skillful driver is a safer driver.””

The premise of a more skillful driver being a safer driver is one well known to fleet managers. With frequent driver training courses and an increase in telematics and tracking, fleet managers and companies are investing in driver safety.

“Volvo is to introduce 100 driverless cars on to public roads as part of the world’s first large-scale autonomous driving pilot.

The cars will drive in normal, everyday road conditions, surrounded by pedestrians and other traffic, and will even be able to self-park, as the Swedish car-maker (which is now under Chinese ownership) attempts to demonstrate the benefits, including improved safety and efficiency, of self-driving cars.”

This large-scale test will make self-driving cars and their technology more attractive to fleet buyers and fleet managers. The technology is still a long way off what is required for fleets, but it is moving closer. What was once something from a sci-fi film can now be seen as something that could feasibly happen.

The future of self-driving cars

Self-driving cars were thought of as a Google project too help them spend all that lovely money. However with more and more manufactures buying into the self-driving cars technology the thought of these cars on our roads is not the flight of fantasy that it once was.