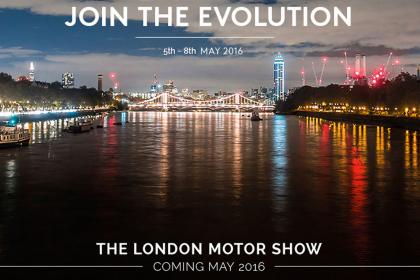 The London Motor Show is coming back after an 8 year absence. The show, which will be held between the 5th and the 8th of May in 2016 promises to feature everything you would expect in a prestigious international motor show. In a fairly major change to previous events, the show will take place in the leafy surroundings of Battersea Park on the banks of the River Thames. The organisers are hoping that the new location will be a boon to the show and, providing the weather holds, it should be a fantastic day out – even for the non-car buffs in your life.

In this article we’ll take an early look at what you can expect if you head down to the show next year. Keep an eye on this blog in the weeks and months to come. We’ll make sure that you’re one of the first to know what’s happening.

The London Motor Show is keen to be a family event and not just a trade show. This means there will be entertainment for all the family, particularly children and young people. Details have yet to be fully revealed but we’ve been promised remote control car racing, video games consoles allowing visitors to play some of the latest games and the opportunity to meet some Formula One drivers. You can find full details of the entertainment at the London Motor Show as it is revealed on this page.

Clearly though, one of the main reasons to go to the London Motor Show is for an advanced preview of the cars we’ll all be driving around in by the end of the decade. Toyota, Volkswagen and Fiat are among the companies that are exhibiting. Expect lots of talk about driverless cars and electric vehicles at the show. This means that a new clutch of technology companies will also be coming to the show, such as telematics providers and car electronics companies.

If the London Motor Show doesn’t tickle your fancy then there are plenty of other motor shows across Europe and the world that are well worth checking out. The Frankfurt Motor Show, which takes place every September is more business oriented than its London counterpart but, if you want to see the latest models long before they hit the road then it’s the place to go.  Meanwhile if you fancy a trip across the pond then the Chicago Motor Show, which takes place this October could be perfect for you. It’s a chance to check out what the American motor manufacturers have up their sleeve for the rest of the decade. You can check out the technologically advanced vehicles produced by companies like Tesla.

Are you a fan of motor shows or do you prefer to get your car news elsewhere? Let us know your thoughts in the comments. We’d love to hear them!

Could your company car drivers cut their fuel bills like these taxi drivers have?