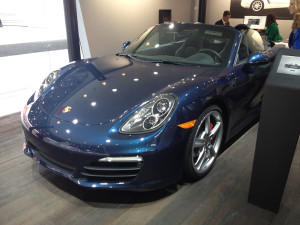 Honda is currently putting the finishing touches to its brand new Honda Civic type-R and, judging by the special video they’ve released to promote it, they’re rather keen on its car engine sound. This got us thinking, which of the cars we lease has the best car engine sounds and are there any vintage cars which sounded particularly special. We’ve taken a look through our range (and our own car histories) to come up with a few highlights and, of course, we’d love to hear yours in the comments!

The original Peugeot 205 GTI was one of the original ‘hot hatches’ (although the term itself wasn’t invented for several more years). Peugeot is attempting to recreate its spirit (and its sound) in the updated Peugeot 208 GTI. Judging from the online reviews they’ve succeeded in doing just that. The 208 GTI looks and sounds fantastic and manages to encapsulate the spirit that made the original Peugeot GTIs so special.

I bet you didn’t know that we leased Porsche Boxsters? Well, we do and, as any loyal viewer of Top Gear will know, the Boxster makes a rather special sound. You only need to look at it to know that it’s a true driver’s car but a listen to the fabulous throaty sound of the engine will definitely confirm that. It can go from 0-60 in a ridiculously short amount of time and you can be certain that everyone will know that you’re doing it!

Top Gear asked its viewers and readers to choose their favourite car engine noise recently and many of them went for this remake of the classic Jaguar E-Type. Never one to miss out on the chance for a spin in something powerful Jeremy Clarkson took one out for a drive. The video is well worth watching, if only for the look on Clarkson’s face when he’s driving at speed.

Which car do you think has the best engine sound. Let us know in the comments so that we can include them in a future round-up

Driverless Cars in the UK - The Future