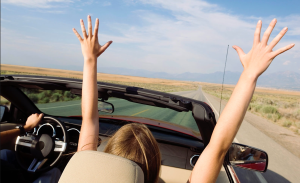 It’s hard to believe that we’re already half way through 2015! The sun is shining and it finally feels like Summer could be here to stay for a few weeks. The motoring world doesn’t take a holiday so we’ve still got plenty of fleet management news to bring you. There are plenty of exciting new models due to arrive before the end of the year. The government is also preparing to announce its road-building plans for the next five years in the upcoming budget and we’ve got a few summer driving tips to share with you.

Driving in the sunshine

If you’re lucky enough to own a convertible then this time of year is heaven. For the rest of us it’s worth taking a few minutes to make sure that your car is ready to face the hot summer days that hopefully lie ahead. First things first – make sure you carry some bottles of water in your car. You never know when you’re going to get stuck in traffic or break down and you don’t want to spend a few hours sitting in a sweltering car with nothing to drink. Similarly, make sure that the air conditioning in all of your cars is in good condition. You don’t want to discover it’s ineffective as the temperature starts to rocket, and your drivers are fretting!

Coming to a showroom near you…

The first of Honda’s new Civic Type-Rs have rolled off the production line and they’re certainly worth a look! If you were a fan of the slightly space-age version of the previous Honda Civic then this may well appeal. The car is being built at Honda’s base in Swindon. The company has yet to announce a specific date when the car will become available but it’s expected to be on sale before the end of the year. Will you consider a Honda for for your fleets?

The next car to make it into our fleet management news roundup is the new Vauxhall Insignia. The Vectra successor has had a somewhat better reputation than its predecessor and Vauxhall is hoping to improve things with its latest tweaks. The new model is compatible with Apple’s CarPlay technology and offers a new 1.6 litre diesel engine.

George Osborne’s second budget of the year included a number of road related announcements. The controversial Stonehenge Tunnel is expected to get the go-ahead along with various improvements to roads in Norfolk and the South Downs. The government is also planning to introduce 80 miles of Smart Motorway in the north west where speed limits and other driving legislation will be changed in response to road conditions.

Which new car models and other motoring developments are you most excited about? We’d love to hear about them, either let us know about them in the comments or talk to us on Twitter.