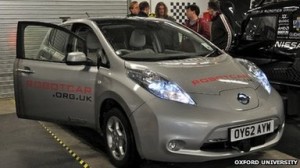 The Google Driverless Car project has gathered plenty of press, and Google have been excellent at generating publicity for the vehicles. Are these driverless cars really going to be the future of driving, are they as big a fiction as our personal jetpacks?

The AA “State of the Nation’s Cars” survey for 2013 asked drivers what they thought of the future of cars, and received some interesting answers.

It’s not surprising what one of the main concerns about driverless cars is – the love of driving and the cars that we drive.

“”I enjoy driving too much to ever want a driverless car”

Driverless Cars and The Future

Forbes Magazine think that the future of Driverless Cars might even keep Elon Musk’s Hyperloop as a theoretical idea. They bring up business travelling time being wasted time,

“I don’t think that it’s too extreme to think that Google’s driverless cars are going to be a common private vehicle in a decade or so. And we can already stick WiFi in a vehicle, that’s easy. At which point sitting in one’s car is going to be very like actually sitting in one’s office. It’ll be a productive time: and if the time spent traveling is productive then the value of faster travel falls precipitately.”

If driverless cars are a real possibility, sales managers on the way to calls will truly have a mobile office.

CIO have looked into the future of driverless vehicles – and for them it’s all about the trucks,

“Trucks. The future of driverless driving is all about trucks. So forget about that sensor-equipped Volkswagen Passat, and get ready for a 40-ton Peterbuilt 18-wheeler.

In the wake of new U.S. Department of Transportation guidelines for automated-vehicle testing, experts such as Ümit Özguner, a professor with Ohio State University’s Center for Automotive Research, are predicting that the first wave of operational autonomous vehicles will be devoted to long-haul deliveries. This is about moving cargo, not people”.

Driverless Vehices in the UK

“The plans have been unveiled in a blueprint by the Department for Transport, as part of a £28bn investment in British roads to reduce congestion. The report says driverless vehicles are capable of driving on their own “using knowledge of the environment in which they are driving”.”

The future of fleets

At the moment, driverless cars are something interesting to follow in tech magazines. However, with driverless vehicles being used in hostile environments, is it only a matter of time before we load up our fleet vehicles, press a button and just go?

Driver fatigue - how do you ensure your company drivers are safe?

Driverless Cars in the UK – The Future

Fleet Managers – Do You have a Technology Policy for your Fleet? Who wipes the company car memory??