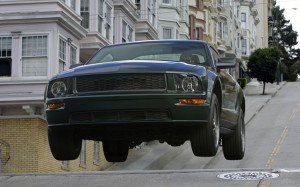 We’re all for safe driving and road safety in the real world. But every now and again, we love to watch those car chase scenes from the movies that fire the imagination. Sheer speed, maneuverability, driving skills and pedal to the metal fun make a cinema car chase great to watch. There are so many to choose from (and I am disappointed that Keanu Reeves and Sandra Bullock shooting across an airport runway on a sheet of wood being followed by a bus doesn’t count as a car chase) but here are two of our favourites.

You knew we were going to include it so we may as well put it in first. Never before had a car chase been shot like this. Fast editing, no thought given to continuity because the director and editor knew that the excitement of the chase was more important. Knowing that Steve McQueen was a great driver adds to the excitement of the scene – it COULD be him bouncing over the crest of a hill at 100 mph. Belief doesn’t have to be suspended thinking it’s a stunt driver (even though a lot of the time it was). Even 45 years later fans still pose in front of the famous Bullitt locations in San Francisco.

And admit it – when you watch this scene and the camera is in the car, you bob and weave as the car goes round corners and imagine you are driving the car. Or is that just me?

What a film. “What colour is the boat house in Hereford?” (no spoilers).

And what a car chase. It’s claustrophic, has the right amount of potential pedestrian danger (“Get of that zebra crossing, slowcoach!) and Jean Reno flings round that car like he’s controlling it with his mind. The Natascha McElhone car chase scene is amazing too,  but this one wins by a slight measure,

We’ve got lots more car chases in films lined up to blog about – what car chases would you include in a list of your favourites?