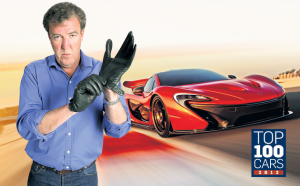 The Sunday Times’ motoring section, Driving, recently announced its list of the Top 100 Cars of 2013. I love end-of-year lists like these, and not just for cars. News stories, albums, BBC Sports Personality of the year; all these lists give us a chance to sit back and take stock of the year that has passed.

Jeremy Clarkson wrote the foreword, and wrote about hybrids. Given his well-publicised dealings with electric cars in the past – The Top Gear segment on electric cars was subject to a long and costly battle with Tesla – what would Clarkson say about the new and evolving crop of electric cars?

Clarkson on the Toyota Prius

“Remember how people used to sew CND badges to their parka in the 1960s? This simple act didn’t actually stop the SS-18 missiles from rolling down the Soviet production lines but it did tell everyone that you were interested in nuclear disarmament. Well, that’s what the Prius is: a badge. A full metal jacket that tells other people you are interested in sandals as well. It’s a knowing wink, a friendly nod. And I hate it.”

No big surprises there then. But he doesn’t hate it for the reasons that you think. He doesn’t like it because it doesn’t go far enough; Clarkson likes it when companies go all out, and it’s the same way with electric cars. The car can be powered however you like – as long as it has the performance.

“Ferrari is working on a car called, weirdly, the Ferrari the Ferrari, which uses much the same technology. Porsche is nearly there with a hybrid called the 918 Spyder. Already it has lapped Germany’s Nürburgring in 6 minutes and 57 seconds. That’s faster than any road car has gone before. Mercedes is working on a hybrid S-class. They’re not statements. They’re not cars for eco-lunatics. They are cars for people who want the speed they have now. And in some cases even more. But not the petrol bills. What we’ve done then is taken a technology intended for the greens . . . and hijacked it. We’ve weaponised the muesli.”

Whatever way you look at the new range of cars – whether they are good cars for the environment, whether they lower vehicle running costs, or whether they can keep the performance, more and more people in the industry are investing and testing and refining. Weaponising muesli or not, the different roads travelled by designers are all meeting at the same point.

Clarkson on the evolution of cars

“I have enjoyed my time with the dinosaurs. I shall look back at the Mercedes SLS AMG and the Ferrari 458 Italia and the Aston Martin Vanquish with a teary eye. And I shall always keep a picture of the wondrous Lexus LFA in my wallet. But that chapter is closing now. We’re about to start a new one, and from the snippets I’ve seen so far, it looks rather good.”

The future of electric cars