Electric City Car for Run Your Fleet – the BMW i3

Electric City Car for Run Your Fleet – the BMW i3 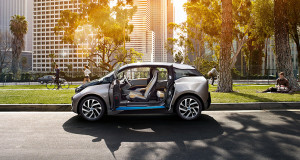 New Car for the Run Your Fleet Fleet!

After 30,000 miles behind the wheel of the Run Your Fleet electric Smart car the time to say goodbye is upon us.

It’s been quite a journey, encompassing range anxiety, public transport and free parking. Also not forgetting an appearance on Midlands Today (I’m not as fat in real life as I look on the TV, apparently.)

The journey started in March 2010. The Coventry and Birmingham Low Emission Demonstrators (CABLED) scheme invited Run Your Fleet to take part. This gave us the opportunity to take delivery of the newly-launched smart ForTwo electric drive.

Electric Vehicles in a Business Fleet

So what did I learn that would be useful to those thinking of using electric vehicles in a business fleet? The trial didn’t get off to the greatest of starts. Due to a compatibility issue between the size of the charger and that of my letterbox, I was unable to recharge it on the first night. This triggered a sequence of events culminating in a journey through Warwickshire’s leafy lanes powered by the leg muscles of my Managing Director.

3 years is a long time in electric vehicles.  Advancements in battery technology, infrastructure improvements and considerable investment from major manufacturers have meant that many barriers to EV ownership have been removed.

With that in mind in an attempt to maintain my environmental pioneer credentials, I am looking for a suitable EV to replace the Smart.

The Smart is limited for reasons of practicality in terms of electric city cars. The interior is well packaged and roomy, however, the lack of rear seats has presented me with a number of logistical issues. Therefore, the practical criterion for the replacement are simple;

To assist with my research, Sytner BMW in Birmingham provided me with a demonstrator of their recently launched electric city car, the BMW i3.

How will the BMW i3 fare on my daily commute across the Midlands’ congested motorway network?

Thanks Craig, and we look forward to hearing what you think as Craig blogs about the BMW i3 joining our company vehicle fleet