Company Car Drivers – Where do you stop for lunch? 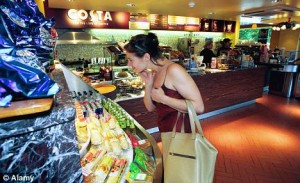 After the AA reported that the price of petrol station goods is so high that it puts drivers off stopping in the first place,  Autoblog looked into this further. They went to Fleet services on the M3 one day for lunch where they bought a sandwich, some sweets, a can of energy drink and a litre bottle of water which set them back £12.57! Another shocking revelation was that the water they bought cost them nearly double what a litre of unleaded petrol would. Since when was water more expensive than petrol? Very interesting!

The main concern of the AA is that drivers may be avoiding stopping at all due to such sky high prices, causing more accidents and fatalities on the road. As a company car driver, or someone who may spend a lot of time travelling it’s hard to justify spending £12.57 more than once a week on something which doesn’t even seem like much of a meal.

Edmund King, the president of the AA, said “We should be encouraging drivers to take a break and stop at the services as it is estimated that up to 20 per cent of motorway fatalities may be due to driver fatigue”

So how can company car drivers and frequent motorway users avoid spending so much on something that is such a necessity? A spokesman for sat nav manufacturer Garmin, Anthony Chmarny, has said “By using the thousands of points of interest in our sat navs, drivers can easily find local shops just a few minutes off the motorway where they could save money on food and beverages.”

It has been estimated that this could cut your lunch bills by half if you’re a regular at the service stations! So will you be cutting motorway services out of your journey from now on? Or is that impractical when you drive for a living or spend a large proportion of your time travelling on company business in a company car?