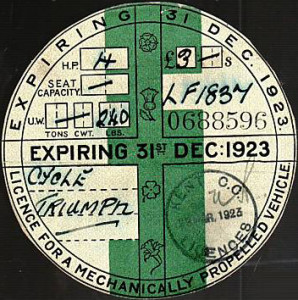 There were many items in George Osborne’s financial Statement that were relevant to Fleet Managers financially, but here’s one that also seemed to catch the attention of the news and media emotionally  – the abolition of the paper tax disc.

“The disc was introduced in 1921 but officials say it is no longer needed with the DVLA and police now relying on an electronic register. The new system will allow people to pay the charge by monthly direct debit. The Treasury said it showed government was moving “into the modern age”. It would also make “dealing with government more hassle free”

Fleet Directory reported that industry was pleased to see the back of the tax disc. Tax disc trashed and fuel duty frozen in Autumn Statement 2013

“These decisions were welcomed by Damian James, Chairman of the Association of the Car Fleet Operators.

James is glad that the Government has finally ditched the tax disc, branding it “a totally unnecessary piece of red tape that isn’t required in the 21st century with the introduction of rapidly accessible digital records and roadside cameras to check as to whether a vehicle is licensed.”

Scrapping the physical tax disc would save the government around £3M a year and fleet operators £10m, reckoned Gerry Keaney, Chief Executive of the British Vehicle Rental Leasing Association.

Steve Clarke of the Fuel Card Group was also dancing on the grave of the tax disc, saying: “Tax discs made sense when they were introduced in 1921 but not now”

“So don’t think you can get away without paying it.

Unless of course you drive a company car with CO2 emissions up to 100g/km – like my Audi A3 Sportback for example, or the 98g/km Vauxhall Insignia, Honda Civic 1.6D, Volvo V40 diesel and so on. These cars qualify for £0 VED (Vehicle Excise Duty – or road tax to you and me).

Which is always a saving worth having – along with part of that £10m efficiency saving!”

Will you miss the tax disc? How much per year do you think that your company will save?